The Tricky Art of the Apology 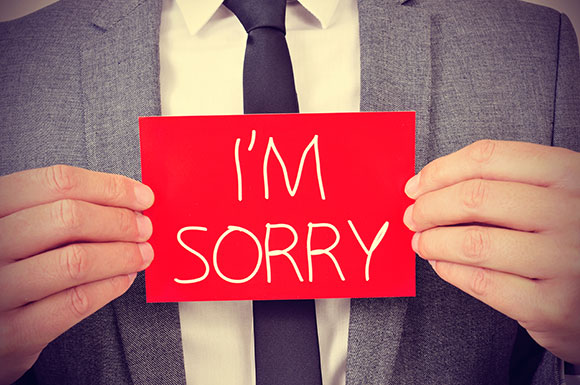 Who hasn’t said something in the heat of the moment that they regret? Everyone makes mistakes. We make insensitive statements, we speak before we think, and we let our emotions get the best of us.

No workplace is perfect. Managers berate subordinates in meetings. Colleagues make snide remarks about each other. Even worse, people send emails, texts, or tweets without giving sufficient consideration to how the messages will be received. This makes our insensitivities more public and all the more egregious.

Even seasoned executives aren’t immune from foot-in-mouth disease. Tony Hayward, the former CEO of British Petroleum, famously complained that he “wanted his life back” in the midst of the 2010 oil spill. (He later apologized to the families of the workers who had died in the tragedy, as well as the thousands of people whose lives were totally disrupted.)

Former Harvard President and Treasury Secretary Lawrence Summers had to apologize in 2005 for his contention that “innate differences” between men and women accounted for the under-representation of women in the sciences. Senior advertising executive Justine Sacco was fired for posting an insensitive and racist tweet about AIDS in Africa. And more recently, Microsoft CEO Satya Nadella apologized for suggesting that women should not speak up about pay inequities.

It’s time for an apology. But apologies can be tricky and can backfire. Without some forethought, an apology – public or private – is no guarantee you’ll redeem yourself. Sometimes, people aren’t ready to forgive.

More often than not, however, your apology fails because you apologize the wrong way. Most people approach it with some version of:

In other words, we make the apology all about ourselves. We justify, explain, and coat it with our own polish.

When you screw up, people don’t want to hear about you. In order for them to forgive you, they want to know you recognize how you offended them. Your rationalizations for offending them aren’t going to endear you.

Make your apology about them and how they must be feeling. If you’re not sure what that is, ask. Focus on how they have been affected by your mistake or your words. Ask what they need from you.

You should take all ambiguity out of the situation. Don’t assume you know how they feel. Inquire, and listen to their answers.

Acknowledge Their Feelings and Values

The people you’ve offended need you to acknowledge their perspective. Don’t argue it. Let them know you hear them by affirming and encouraging them to talk about what is important to them.

When you listen to them talk about their feelings, you are opening the door to healing the damage done.

When you make a mistake or say the wrong thing, you diminish trust in the relationship you have. You need to repair that by reminding them of your shared history, your shared goals. You reassure the other party that you want to continue to share commonalities with them and work together again. Your apology should include your intention to not let them down again.

Fine tuning an apology depends on knowing how you’ve offended them and what actions will aid in repairing the relationship. Often a simple statement of empathy will go a long way to restoring trust. At other times some form of compensation is in order.

There are no hard rules as to how to deliver an apology – whether written, public, private, or otherwise. Each is unique in its own way. What is appropriate in one situation is not in another. Only you can tell how to phrase it, how to deliver it, and how to make it resonate with the other party.

An apology always requires you to offer an expression of empathy to the offended party. Without sincerely stating how your error has affected them, your apology becomes a hollow justification of yourself and your actions.

When crafting an apology, ask yourself, “Who am I talking to, and what are they looking for in my apology?” If you’re not sure, then consult with a trusted peer or your coach.