The Failure of “Good-Enough” Cultures 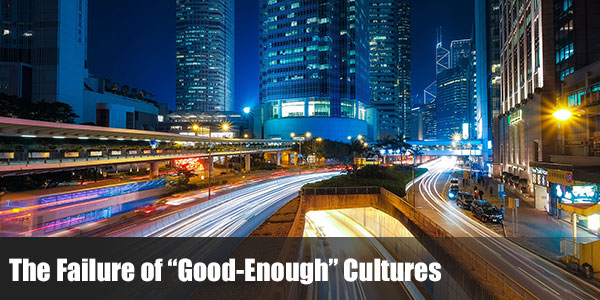 Billions of dollars are wasted each year by companies who compromise on standards. Many leaders endanger themselves and their organizations by permitting a “good-enough culture.” This danger of mediocrity fortunately has a remedy.

“Only the mediocre are always at their best.” ~ Jean Giraudoux, French essayist

The good-enough culture plagues an organization in every aspect of its operation, all the way down to the most basic. Some of the more prominent effects are:

Leaders experience many more unseen problems buried down under the details of every department. The issues feed on themselves if not corrected.

The good-enough culture flows down from the top of the organization. It takes root when leaders believe that a good-enough approach is acceptable.

Typically, leaders who have the impression that life for them is rewarding enough don’t see the need to work to make things better for everyone else. Leaders with a self-focused mindset have one or more of the following issues:

Leaders who don’t understand the power of excellence don’t care enough about pursuing it. This lack of caring is what author Subir Chowdhury claims is the main cause of a good-enough culture, in his book, The Difference: When Good Enough Isn’t Enough (Penguin Random House, 2017).

When leaders don’t care enough about being the best they can be, why would staff? Each layer in the organization takes its cue from the one above, and all of them ultimately from the top. Uncaring leaders set a strong example that caring is not needed by anyone. The result is mediocrity at best, total failure at worst. Leaders who are excellence-minded see both of these as failure.

Organizations fail, but not always because they’ve crashed to the bottom. Leaders often cause slow failure simply by allowing mediocrity to set in. When things are “good enough,” people are lulled into complacency and a false security. They are unprepared to respond effectively when the bleeding begins, and gradual decline ensues.

Organizations and leaders who don’t care much about excellence will signal this throughout the system. Some signals are subtle, some are clear. Here are some examples:

When leaders reveal these and other symptoms it is a general indication that they don’t really care enough about excellence to truly implement it, and probably don’t understand how to.

Caring about excellence is everything. A truthful leader molds a team that improves communication, timeliness and a thorough review of all difficult issues, large and small. A leader who’s considerate of others demonstrates the importance of relationships to success. Leaders who commit to such responsibility raise the level of accountability within their staff. Employees who are held to account by their manager also hold each other to account. Determined leaders foster a group spirit that overcomes challenges that once made people surrender.

Leaders can transform their organizations and reach potential never imagined if they put their immediate needs aside and care for their people and the outcomes of their endeavors. Their caring becomes contagious. Everyone’s felt needs will be met more effectively when a caring culture is in place.