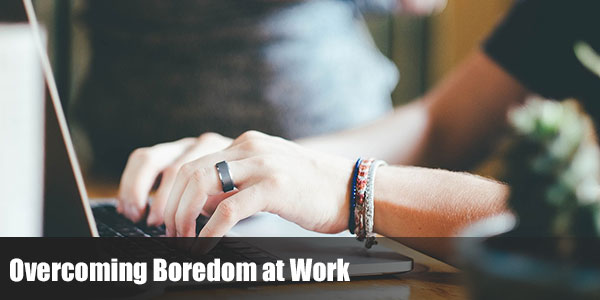 Even though you may have a great job, you can still experience boredom. Who hasn’t been sitting at the computer when a restless feeling starts gnawing away and thoughts meander anywhere but on the task required? A feeling of boredom can cause one to question the meaning and value of just about everything.

Boredom isn’t just wasteful, it is stressful. If you’re busy, and yet still bored, it’s even more so.

If boredom came solely from a lack of things to do, we could eliminate boredom by simply having more to do. But this solution only works in the short-term when what we are asked to do does not feel meaningful.

Boredom is not something to be taken lightly. Research suggests that many areas of a person’s life can be seriously impacted by feelings of boredom. In studies using a boredom-process scale, those who rated low were better performers in areas such as education, career and autonomy.

Let’s explore three types of boredom. The first type shows up when we are prevented from engaging in wanted activity. The second type occurs when we are forced to engage in unwanted activity; and the third type is when, for no apparent reason, we are unable to feel engaged for any length of time in any particular activity.

A 1989 study indicated that an impression of boredom may be influenced by an individual’s degree of attention. A high acoustic level of distraction from the environment correlates with higher reports of boredom.

One study suggests that boredom has an evolutionary basis that encourages humans to seek out new challenges, which may, ultimately, influence human learning and ingenuity. Perhaps it was boredom that propelled Christopher Columbus to explore new continents. Many of today’s innovations may stem from people who seek out new challenges.

Are Some People Prone to Boredom?

Is there such a thing as boredom proneness? Apparently so, and it is defined as a tendency to experience boredom of all types – typically assessed by something called the Boredom Proneness Scale.

Boredom proneness is clearly associated with attention problems. It has been shown to be linked to symptoms of depression.

Although boredom is often viewed as a trivial and mild irritant, proneness to boredom is linked to a diverse range of psychological, physical, educational, and social problems.

How can we adjust work when boredom strikes, even though we may have more than enough work to keep us busy all day? How do we escape that feeling when we have a task that doesn’t excite or engage us?

When all else fails, commit to trudging through when that seems like that’s all you can do. At times, we just have to keep going—even while resisting it—until something interesting comes into view again.

It’s easy to dismiss critical “stuck points” in your career as temporary boredom. In actuality, boredom is a sign that you need to do something else. Don’t let it become habitual. The longer it lasts, the harder it is to get “unstuck.”

In the end, boredom can seriously undermine others’ perceptions of your potential, as well as your chances for more interesting work opportunities. Speak up and discuss its causes and solutions. Your brain craves interesting things to do.