Leadership in the Time of Disruption 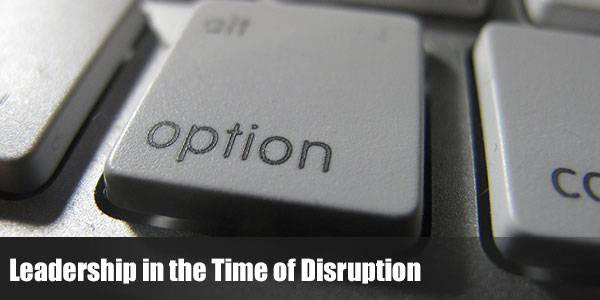 In the past decade, we’ve seen remarkable innovations and extraordinary technological advancements change the way we live, play, and conduct business.

Today, anyone with a smartphone has access to general artificial intelligence. We can easily manage everyday tasks (Google Assistant), send money (Venmo), travel about town (autonomous taxis in some U.S. cities), and answer our doors—from anywhere (Ring).

In the world of sports, racing sailboats have gone from large, single wooden hulls to aerodynamic vessels of flight. Their once canvas sails are now wings that carry the team on two or three small hydro-foils faster than the speed of wind.

Simulators and virtual reality are now a part of learning and training. Organizations have become data-driven cultures, led by Chief Data Officers, who work with data scientists and computers that process hundreds of hypothetical questions and answers.

And incredibly, we’re just getting started.

The most notable innovations are the direct result of disruptors: leaders who changed the game. They transformed existing markets (or created new ones) by focusing on convenience, simplicity, accessibility, or affordability. Disruptive leaders learned to innovate more quickly, cheaply, and with less risk. But this is no easy feat, especially in today’s accelerated environment. For many, disruption causes anxiety, fear, and leads to disruption fatigue.

Ignoring the problem, or worse, feeding the fear, are not real solutions. Leadership in the time of disruption calls for a two-prong approach: improving current product performance and developing new disruptive technology.

In many cases, starting, re-tooling, and scaling a business is easier than ever before. But achieving and maintaining success is another matter. While rapid innovation and new technologies allow for faster speed to market, there are considerable risks and impacts.

Leadership in a time of disruption calls for an examination of mission and vision. It requires a clear understanding of current, as well as potential future disruptors. To succeed, leaders, executives, and managers must lead with careful consideration and mindful intention.

While disruptors are innovators, not all innovators are disruptors. Disruption changes how we think, behave, do business, learn, and live life. Disruptive innovation displaces an existing market, industry, or technology, and produces something new, more efficient, and worthwhile.

Researcher, professor, and author Clayton Christiansen described disruptive innovation as a corporate effort to redefine quality, adopt new technologies, and anticipate customers’ future needs. To put it simply, instead of trying to best their competitors, disruptors change the game.

In The Innovator’s Dilemma: When New Technologies Cause Great Firms to Fail(Harvard Business Review Press, 2016), Christiansen shares his research on success sustainability, and the great paradox of two principles taught in business schools: that you should always listen to and respond to the needs of your best customers, and that you should focus on investments of those innovations that promise the highest returns. But according to Christianson, these two principles “sow the seeds of every successful company’s ultimate demise.”

Most sustaining technologies foster improved product performance; they are discontinuous, radical, or incremental, explains Christiansen. Disruptive technologies result in worse product performance—at least in the near-term; they underperform established products in mainstream markets. But, they have other features that a few fringe (and generally new) customers value.

Are we burned-out on the hype?

The word “disruptive” evokes memories of school children unable to self-soothe or stabilize feelings, passionate entrepreneurs sharing their vision, and bosses who are feeling the pressure from their bosses or shareholders.

In an interview with The Guardian, Georgia Institute of Technology Professor Ian Bogost shared with Leigh Alexander, “The big difference between even disruptive innovation and plain disruption is that the former was focused on some improvement to a product or service or sector or community, while the latter is looking first at what it can destroy. Everything is fire and brimstone.”

When Christiansen first used the phrase “disruptive innovation” it evoked possibility, excitement, and hope. Today it signals uncertainty and change. Leadership in the time of disruption requires that leaders address fear, before it takes hold.

A fear-based culture is not always easy to spot, at least at first. Indicators to watch for include:

Certainly, a healthy level of fear is vital for individuals and organizations. However, leaders contribute to a culture of fear by doing nothing; unfortunately, these leaders are often unaware that their leadership is fear-based. Instead of trusting (and inspiring) their colleagues and employees, they employ fear as a means to control. These leaders also create silos within their organization (isolating lines of business, departments, teams, and individuals) and set unrealistic goals and expectations.

Fear-based leaders may have good intentions, but when their own fears are left unaddressed, they manifest into a heightened sense of urgency.

In a recent HBR article, researchers examined what happens when leaders and organizations emphasize urgent action over thoughtful consideration.

The researchers found that by offsetting a strong locomotion motivation with a strong assessment motivation, an organization can grow conscientiously.

What Great Leaders Do in Disruptive Times

We’ve moved past the industrial age to the information age, where data, blockchain, and quantum computers may prove to be the great disruptors in every economy, sector, segment, and industry. Understanding the basics of these technologies can help leaders address fears and engage all stakeholders in the development of strategies and tactics for sustainable technologies and disruptive innovations.

Examine your assumptions. What do you know about disruptive innovation? What do your employees know? Here are just a few topics to consider:

Data: Facebook, Google and Twitter now collect 5.6 billion bits of data per day. And in just the first three weeks of February 2020, HBR published 11 articles on the subject of data. How are you using data? Do your employees understand how their data is being collected and used?

Blockchain: a growing list of records that are linked using cryptography. Each block contains a cryptographic hash of the previous block, a timestamp, and transaction data. The data in any given block cannot be altered retroactively without alteration of all subsequent blocks, which requires consensus of the network majority. Reuters has created a graphic of this process.

Quantum computers:  a handful of companies have introduced prototype quantum computers. The fundamental component is the quantum bit, or qubit, which can have a value of 0 or 1 at the same time. This allows quantum computers to consider and evaluate many outcomes simultaneously, thereby increasing their calculating power exponentially.

Mission, Values, and a Triple-Bottom Line

Review your mission, values, and understanding of a Triple-Bottom Line.

Twenty-five years ago, John Elkington coined the phrase “Triple Bottom Line.” In 2018, he pointed out the misuse as an accounting framework, where profit remains center stage. In the HBR articleElkington explains, “The TBL wasn’t designed to be just an accounting tool. It was supposed to provoke deeper thinking about capitalism and its future, but many early adopters understood the concept as a balancing act, adopting a trade-off mentality.” The goal of the triple bottom line was to transform a system change; a disruptor to unsustainable sectors and a genetic code for next-generation market solutions.

Rather than re-distribute wealth, could we pre-distribute it? Could we democratize the way that wealth gets created in the first place? These are just two of the questions Don Tapscott posed in a TEDTalk. “Technology doesn’t create prosperity, people do. But here’s where technology has escaped out of the genie bottle. It’s giving us another opportunity to rewrite the economic power grid and the old order of things, and to solve some of the world’s most difficult problems, if we will it.”

Fear of overwhelm keeps us from recognizing the feelings (and existence) of others, and often, even our own fears. Ironically, the key to overwhelm is an ongoing practice of compassion.

Practice compassion: Mindfulness teacher Tara Brach, PhD, has developed a great tool leaders can use to practice compassion daily. In her book, Radical Compassion: Learning to Love Yourself and Your World with the Practice of RAIN (Viking, 2019) Brach details a four-step meditation that quickly breaks the grip of fear, judgment, shame, and other difficult emotions:

Grounded in modern brain science, the practice of RAIN helps leaders uncover limiting beliefs, fears, and our tendency to feed a sense of urgency that chokes our creativity.

Support learning: Learning and development is more than teaching employees the knowledge they need to perform the basic requirements of their job, rather, it encompasses a broader process to increase skills and abilities across a variety of contexts.

According to a 2019 employee survey reported by Statista, the top five skills employees need to develop are influencing and negotiating (46%), having difficult conversations, design thinking, leading and managing change, and coaching.

Likewise, effective leaders pursue personal and professional development opportunities to improve their competence, self-awareness, and other-relatedness. They grow in ways that are transformative, not just transactional.

Have the conversations: Recognize and acknowledge fear and uncertainty.

In the recent Oscar winning movie, American Factory, documentary film makers take a thoughtful look at how a Chinese billionaire opened a factory in an abandoned General Motors plant located in Ohio. It is a deeply nuanced view of globalization, the decline of labor and organized labor, and the impact of artificial intelligence through automation. And your employees are talking about it.

Are you engaging in these conversations? How?

Despite all the advances in technology and innovation, organizations succeed because of people.

As USA sailing team skipper Rome Kirby says, “Stuff happens at a pretty high speed. The pace of the game now has changed a lot, so we got to make decisions and communicate at a pretty high pace…when you get it right, and sail well, it’s the team that wins the race.”

That’s why CEO and helmsman Nathan Outteridge brings home the gold medals. He and some of his team mates have sailed together for as much as ten years. According to Outteridge, “The F50 is a one-designed boat, so all the foils, all the rudders, all the wings, everything is the same. The only reason one boat goes faster than another is because of what the people onboard are doing…if each person doesn’t do their role properly, performance suffers.”

Remember: your communications should be logical and consistent with facts and experience. To understand nuances, explore both sides of the coin. While you want to strike an emotional chord, avoid using fear. Instead, address the interest of all stakeholders. A qualified executive coach can help.