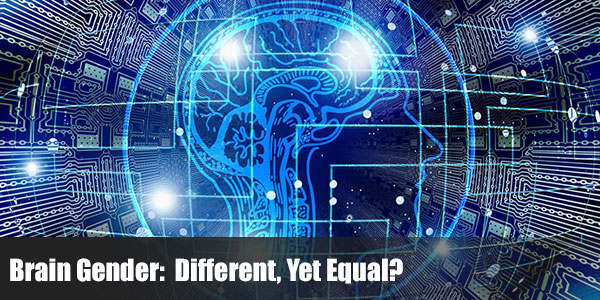 Is there really such a thing as brain gender?

In March 2019, researchers attempted to answer this question based on an MRI database of 490 men and 575 women. What they reported was relative to the structural differences between men and women:

Their summary supports the theory that there are differences between a male and female brain, and that these differences determine our thinking, feeling, behavior, and psychological health. But, notice the keyword they used: “might.”

Unfortunately, they are not alone. For decades scientists have been pointing to similar findings and analysis, commonly accepted as fact. Consider the differences molecular biologist Dr. John Media describes in Brain Rules (Pear Press, 2008):

Research is important: it influences the way we teach, work, and relate to one another. But there are big problems with brain gender theories and studies. They frequently support gender stereotypes, create barriers, and limit individuals from reaching their potential.

The Power of Brain Gender Stereotype

It has been widely accepted that men and women differ in how they manage people and give orders. Studies pointed to how women soften their demands and statements, whereas men are more direct and unapologetic. For example, women use phrases like:

Is this nature, or nurture?

It’s been widely reported that women remember the emotional details of an event, while men recall the ultimate outcome. Furthermore, women use both hemispheres when speaking and processing verbal information, while men primarily use one. These facts are broadly accepted as matters of nature.

But as Cordelia Fine, PhD writes, “Our intellects are not prisoners of our genders or our genes, and those who claim otherwise are merely coating old-fashioned stereotypes with a veneer of scientific credibility.”

The term “neurosexism,” coined by Fine, refers to a flawed belief that results from the intersection of neuroscience and sexism. The belief is based on the assumption that gender differences perceived in character and behavior are caused by biological differences between male and female brains. We now have growing evidence and research that points to self-fulfilling prophecies.

Gina Rippon, PhD, and author of The Gendered Brain (Vintage Digital, 2019), has analyzed gender-related differences in the brain. What she has found is that when the differences in brain size are accounted for, differences in key structures disappear. As Rippon explains in an interview with theguardian.com:

“The brain is a rule scavenger and it picks up its rules from the outside world. The rules will change how the brain works and how someone behaves. The ‘gender gap’ becomes a self-fulfilling prophecy.”

The Greater Power of Neuroplasticity

We now know that the brain continues to grow well into our later years through a process called “neuroplasticity.” Specifically, brain activity associated with a given function can be transferred to a different location, the proportion of grey matter can change, and synapses may strengthen or weaken over time. Neuroplasticity accommodates learning by producing new neurons, cells that help transfer information.

“By the close of the 20th century, the brain had come to be envisaged as mutable across the whole of life, open to environmental influences, damaged by insults, and nourished and even reshaped by stimulation—in a word, plastic.”~ Sociologist Nikolas Rose and graduate student Joelle M. Abi-Rached, Neuro: The New Brain Sciences and the Management of the Mind(Princeton University Press, 2013)

Neuroplasticity demonstrates that brain cells can change in response to intrinsic and extrinsic factors. Not only is it possible to change our brain, we can change the way we look at brains, our nature, and our potential. Even as adults, our brains continually change by the work we do, the hobbies we have, our diet, exercise, thought patterns, and attitudes.

Research from Georgia State University suggests that society’s expectations about gender roles alter the human brain at the cellular level. And while our brain may want to quickly sift, sort, label, and file to conserve energy, humans aren’t that binary. We are misguided when we try to classify people into two distinct, many times opposite, and often disconnected forms of masculine and feminine.

The next time you hear someone make the argument that women are more emotional, consider this caution from Rippon, “A gendered world shapes everything, from educational policy and social hierarchies to relationships, self-identity, wellbeing and mental health.”

What’s most important is to recognize the stories we tell: to each other, and to ourselves. Are we building bridges for positive change? How are we encouraging each other, and ourselves, to grow, collaborate, and achieve, individually and together?